Firstly,  JAMES JOYCE : Dubliner, exile, and the writer of some of the finest literature in the English language. In 1923 he composed Finn’s Hotel, the intermediary work that was his next creative step after he had finished Ulysses and before he had embarked on the radical innovation that is Finnegans Wake. 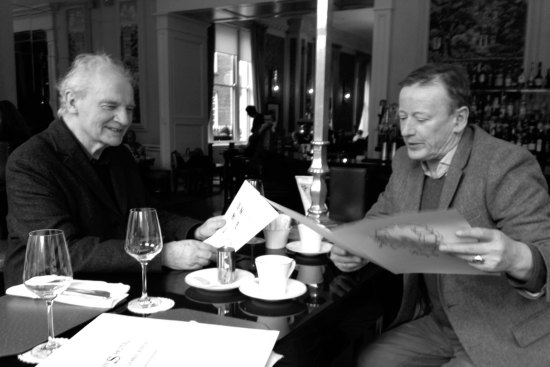 DANIS ROSE of Dublin, Ireland, is among the most distinguished textual scholars of James Joyce’s works. He is co-editor with John O’Hanlon of the critically-established restored editions of Finnegans Wake and the forthcoming 1922 Ulysses. His publications include Ulysses: A New Reader’s Edition; The Textual Diaries of James Joyce; Understanding Finnegans Wake; and The James Joyce Archive: Vols. 28-63. He is currently completing a critical biography entitled James Joyce: The Cost of Fame. He is also co-author, with O’Hanlon, of Love & Curiosity: the Cosmos. SEAMUS DEANE, poet, novelist, and Professor of English and Irish Studies at University of Notre Dame, is a member of Aosdána and of the Royal Irish Academy, a founding director of the Field Day Theatre Company, and General Editor of the Field Day Anthology of Irish Writing and the Penguin Joyce. He is the author of several books of poetry, the acclaimed novel Reading in the Dark, and many studies in literary criticism. He was born in Derry, educated at Queen’s College and Cambridge University, and now resides in Dublin.

MICHAEL CAINE is a book artist: printmaker, typographer, and letterpress printer. Under a variety of pseudonyms he has designed, illustrated and produced over 50 livres d’artiste, including works by Beckett, Crevel, Lorca, Neruda, Pound, and two works by Joyce for Ithys Press. Based in Paris since 1990, he has created, set and handprinted over 130 commissioned works for the crème de la crème of the European bibliophile circle, filmmakers, and restaurateurs.

CASEY SORROW is an American artist, cartoonist, illustrator and printmaker. His drawings for James Joyce’s The Cats of Copenhagen have appeared in editions around the globe and his comics are published in newspapers and across the web. He has a BFA in studio art and BA in English & film studies from Michigan State University and lives in Lansing, the heart of ‘America’s High Five’.

ANTONIO VÉLEZ CELEMÍN of Madrid, Spain is an artist and teacher who understands marbling as a technique akin to and equal to painting and engraving. For this edition he has interwoven ancient Japanese and classic Western methods. His design for Finn’s Hotel combines Suminagashi (a Japanese technique dating back to at least 1055) using only black ink, with the classic western pattern of ‘wavy thorns’. By creating figures in white space, he strives to free-up the imagination of the viewer. Antonio is dedicated to furthering the appreciation of this time-honoured craft through teaching, at Madrid University, as well through his own practice in contemporary art projects such as the ‘Desigual Project’: www.marblinginSpain.blogspot.com

TOM DUFFY of Dublin carries on a four-generation bookbinding tradition whose commissioned work has encompassed many artist’s books, finepress editions, and presentation bindings gifted to popes and to queens. He has bound by hand each issue and copy of the Ithys Press first edition of Finn’s Hotel in his workshop in Dublin’s Five Lamps.